Phase angle controllers should be used when the following conditions exist:

Burst Firing (time proportioning or PWM) at the zero crossings is a good method to control the load power when the following conditions exist:

Soft Start is a method of limiting the rate of rise of the output of a phase angle controllers power output generally during start up only.  Soft Change is a method of limiting both the rise and fall of of a phase angle control’s power output.  Both of these methods are used mainly to limit the load’s inrush due to either the resistance temperature coefficient of a heater lamp or because the load is inductive.  Soft start is useful on high inrush heaters such as Quartz, Molybdenum, Tungsten, or Graphite heaters.  Soft Change can be a good choice for phase angle controlling inductive loads, where rapid changes in the phase angle can induce a DC imbalance in the in load and thus cause misfiring, heating in the inductor, or blown fuses. 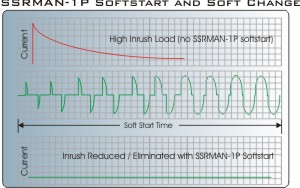 Line Voltage Compensation in a Manually Controlled Heater Process:  In a simple manually operated phase angle control arrangement the user sets the power level of the phase angle controller and this delivers a percentage of the full power to the heater.  Ruling out any other process disturbances, the line voltage can change at any time affecting the power delivered to the heater dramatically (don’t forget P=E^2/R).  Line voltage compensation effectively cancels out the change in line voltage keeping the power delivered to the load exactly where the user sets it. 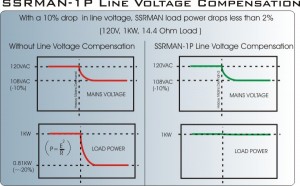 Visit this for the latest news and valuable technical tips